When it comes to spices with brain- and body-boosting benefits, turmeric is king. Originating in India where it’s been used as both food and medicine for nearly 4000 years, this golden powder derived from the turmeric root has been making waves in the West over the past decade. Its recent meteoric rise can largely be attributed to the popularity of the golden latte, a quick-and-cozy way to consume curcumin, the potent anti-inflammatory compound in turmeric that makes it so healthful.

What makes curcumin so powerful?

In a study on various compounds’ abilities to inhibit the proliferation of tumor cells, researchers from The University of Texas’s Department of Experimental Therapeutics found that curcumin has a potent anti-inflammatory effect comparable to that of nonsteroidal anti-inflammatory drugs.

In the brain, curcumin can increase a hormone called brain-derived neurotrophic factor (BDNF). A decrease in BDNF has been linked to neurological disorders like depression, Alzheimer’s, OCD and schizophrenia. A study published in the American Journal of Geriatric Psychiatry found that supplementing with curcumin twice a day improved memory and mood in test subjects. In contrast, the control group who took placebos showed no such improvements.

While we love a golden latte as much as the next person, we think it’s time to turn the corner and try our hand at other uses for this famed spice. Beat inflammation and supercharge brain power with these turmeric-infused recipes. 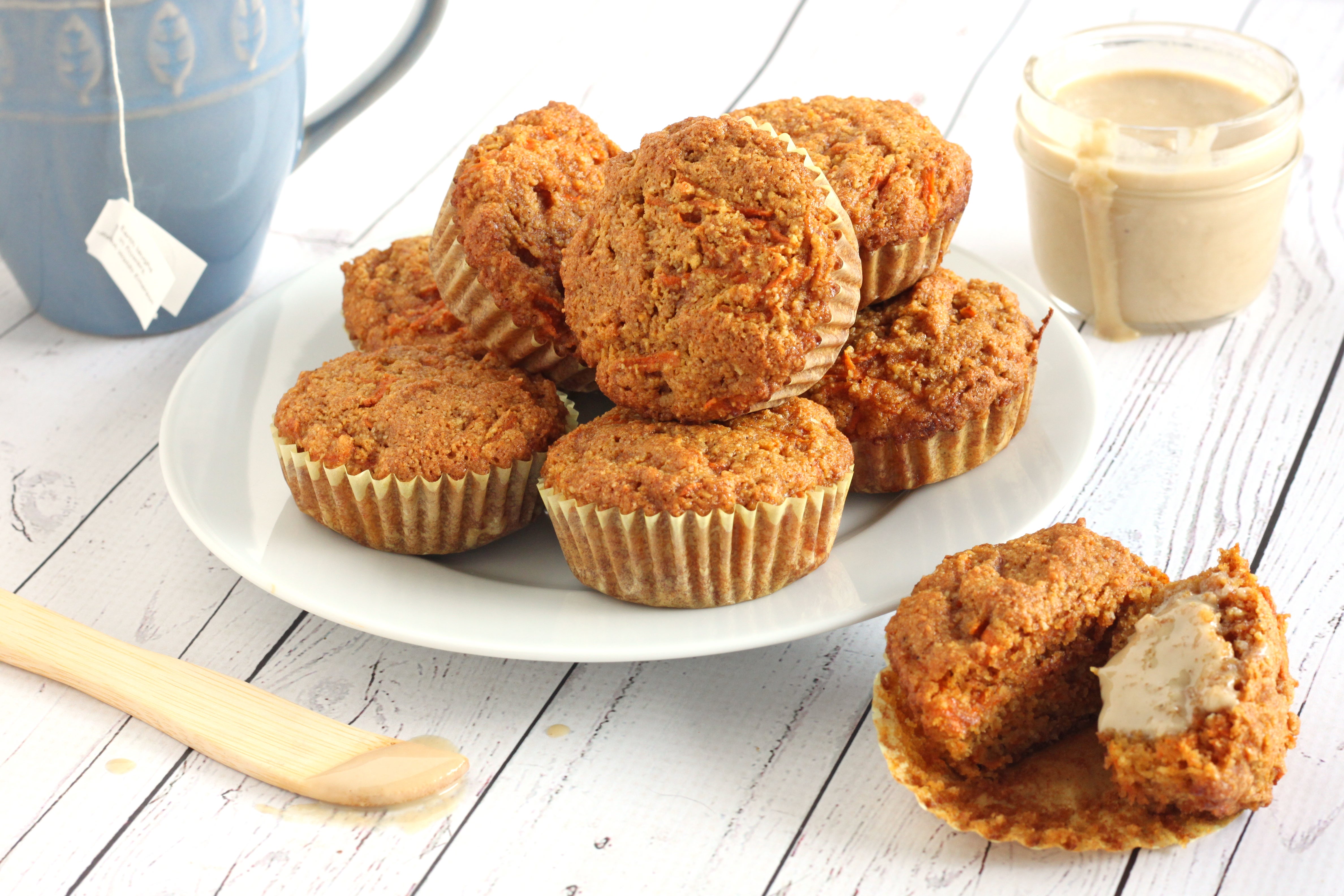 These addicting mini muffins make the ultimate morning meal or snack. They get their cheerful hue from turmeric and are stuffed with beta carotene-rich shredded carrots for improved eye health and natural sweeteners such as shredded coconut and maple syrup. 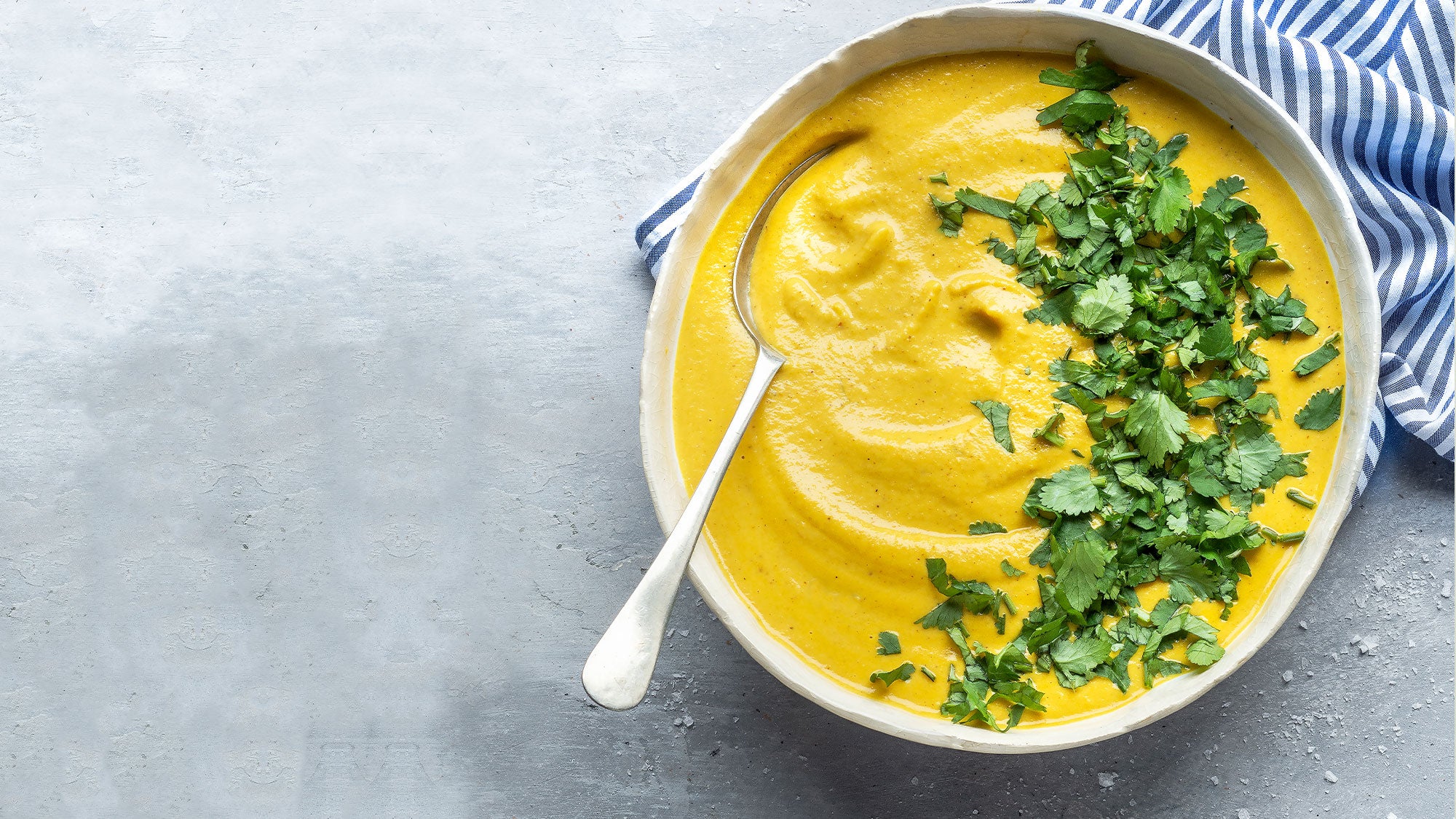 Brighten up winter months with this golden soup, where turmeric co-stars with creamed cruciferous cauliflower. Cauli packs a wide array of nutrients, such as vitamins C, K, B6 and much more, making it a go-to ingredient in any clean kitchen.

These deviled eggs are everything the perfect healthy snack should be: quick, easy, tasty and packed with nutrients. Eggs are a favorite energy source, rich in B vitamins like B12 (which helps prevent fatigue-causing megaloblastic anemia), B2 (which the body uses to maintain energy supply) and B5 (needed for making blood cells and helps the body convert food into energy). In this recipe, we combine the yolk with a tangy mixture of yogurt, lemon, cilantro, and of course, turmeric.

We couldn’t compile a list of the best ways to utilize turmeric without including curry. Along with turmeric, this veggie-packed stew is flavored with black pepper, which contains a compound called piperine that can increase the body’s curcumin absorption by up to 2000%!

Alright, we cheated a little with this one. A CE original take on the turmeric latte, our sippable alternative does double duty for the brain. This nightcap combines brain-supportive turmeric with reishi mushrooms, revered in traditional medicine for its links to mental clarity and improved mental health.

Lassi is an Indian drink, commonly made with mango. This version made with mango and sweetened with maple syrup or raw honey doesn’t stray far from its South Asian roots, flavored with mainstay spices from the Indian subcontinent. Turmeric is combined with black pepper for greater bioavailability while cardamom aids with digestion and provides relief from GI distress like nausea and vomiting.

Jump-Start Your Weight Loss This Spring

All About Protein Powders

Take a Trip to Mexico from Your Kitchen

Elyse Kopecky Demonstrates the Fastest Way to Cut an Onion